You may thinking this is going to be a highly technical post all about the finer points of pruning, not! I’m actually quite a novice at this whole pruning thing, but I did learn a little something while I was busy pruning our little Lavender plants. We have about 50 Lavender plants and hope to continue to add the our Lavender garden each year. We think it will just be lovely in bloom in a big patch along the side of the house. Not to mention the calming and relaxing properties of such plant.  Just walking outside we should immediately begin to feel more relaxed. Of course, I’m kidding, but we do hope to grow enough we can share it with our community.

Back to the pruning… So it goes something like this. We started over half our Lavender plants from seeds back in February and they look amazing!! I have to tell you, it has been quite a journey with these plants. The looked so fragile when they first sprouted, even when we transplanted them, we decided to put them in the raised beds because they were so tiny. I was very skeptical that much would even come of them. However, they have proved me wrong. The look absolutely amazing!! Take a look… 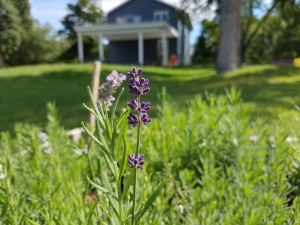 Then there’s the other bed of Lavender, these plants were marked down at a local nursery and I figured they were worth giving a shot. Take a look…. 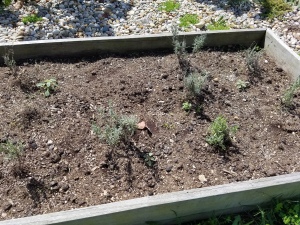 Both beds of plants have been treated the same since we put them in the ground. We’ve watered and weeded as needed. But something began to happen with some of the plants. Parts of them began to die and turn brown, while other parts of the plant was still flourishing, and it got me thinking about pruning and a passage of scripture, which happens to be one of my favorites.

Side note: I remember the first time I really caught a revelation of what John 15 was saying and I just had to share it. I had extensively studied every, and I mean every, word of that this passage. I must say, I’m not sure that my dissection of this passage made the impact I had hoped when I shared it with my then Sunday School class, but I was so excited about it. It was like I finally understood everything!! Please tell me someone can relate to my passion!?

You see, we often look at pruning in the natural and in the spiritual realm as a negative or failure, but God often desires to prune us, both in fruitful areas and in areas we aren’t fruitful. It’s our attitude that will make the difference. I’m not saying I’ve perfected this yet, but I know it to be true.

I can think of one situation in particular, where God was pruning a fruitful branch from my life and, to be honest it hurt, it was down right painful.  Although, I tried not  to take it personally I struggled, I cried, I whined, and I’m certain I groveled. Not pretty! Not the best season of my life for sure! BUT once I stopped all that pity party stuff, God began to reveal something new to me.  He began to produce new fruit in me.

What I came to realize, hindsight, is that God was making room in me for something I would not have seen had I stayed where I was, doing what I was doing. He had more in-store for me than I had in-store for myself.

As difficult as it can be at times, I promise God knows best. You may have found yourself in a pruning season where God is pruning both fruitful and dead branches just remember to trust God. He knows just what He needs to do in you to produce just the right kind of fruit.

John 15:1-4  “I am the true vine, and My Father is the vinedresser. 2 Every branch in Me that does not bear fruit He takes away;[a] and every branch that bears fruit He prunes, that it may bear more fruit. 3 You are already clean because of the word which I have spoken to you. 4 Abide in Me, and I in you. As the branch cannot bear fruit of itself, unless it abides in the vine, neither can you, unless you abide in Me.

This site uses Akismet to reduce spam. Learn how your comment data is processed.