We decided that 2016 was the year! The year we were going to grow some stuff and grow enough to share with our community. We made “Big Plans”, had lots of conversations about what we were going to grow, researched where to buy our seeds, where we will plant the seeds, how we would water the seeds, and don’t even get me started on the germination process. My point is, we had plans.

Next step was to buy the seeds and that we did.  As you might expect, we signed up to receive the newest seed catalogs of the growing season and for those of you that may not know, they begin to arrive in January (gotta have the freshest seeds).  More planning, what seeds would be buy? We pined over those catalogs for weeks trying to pick the varieties of fruits and veggies we wanted to grow. If you haven’t checked out a seed catalog it can be overwhelming with all the choices!! I mean, I thought there were only 3 types of cucumbers, with or without seeds and then the little guys. Wrong!! Pages I tell you, pages!! We finally narrowed down what we thought were the best options for us and placed our order. Relief! Of course, we chose to order our seeds from an organic seed company, non GMO. Only the best for our farm, wink-wink.  We decided we would start small because, after all, this is just a hobby farm. Therefore, we only ordered 1600 seeds!!! ONLY 1600!! You should know, my husband works a full time job and like most husbands he has more that his share of demands pulling on his time, but at the end of the day we thought this was manageable. We were up for the challenge.

Weeks went by and finally the seeds arrived. We were so excited!! We read over each package to understand just what conditions we needed to help these seeds sprout.
We organized them by seeds that needed to be started indoors and seeds that could go straight in the ground. Once we understood what the seeds needed to grow we had to come up with a plan to germinate. Like any good farmer, we again, started the research process for the best ways to germinate seeds. Once we landed on an idea we thought best for us we needed to buy materials because there was going to be some construction!! So, my wonderful husband drew up plans for an amazing growing table, equipped with warming lights both on the top and bottom. I mean, after all, we did have 1600 seeds to plant!!

At this point, we had a decision to make. Plans had been made, seeds had been bought, but would we ever put a seed in the dirt?

2 Corinthians 9:10 For God is the one who provides seed for the farmer and then bread to eat. In the same way, he will provide and increase your resources and then produce a great harvest of generosity in you.

All the plans were in place. Seed had been provided, but if we never opened the package and dropped a seed in the soil could we expect a harvest? Were we willing to put fo 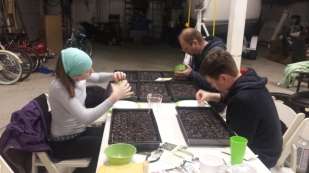 rth the effort, to take the next step to see the harvest? It was in our hands, seed was here, we had everything we needed to get an increase, but we had to plant the seed….  Sometimes, the vision or idea is easy to see, but walking it out becomes the difficult part. It’s like ideas, they are only thoughts until we make them a reality.

Many of us have dreams and ideas of things we want to do, we are good at making the plans, coming up the with the creative slogans or catchphrases, but we never make it past the planning stage. As we fail to make a move forward with our plan discouragement sets in and we start to think, “what’s the use anyway” and we just set that plan on the shelf. I’ll be honest, it’s scary at times. There’s anxiety that tries to rear it’s ugly head, voices in side your head telling you you’re gonna fail, why even try, but if we never take that step and open the proverbial seed package and plant a seed you will never know.  Try it, see what happens! Plant that seed and expect to see the increase. So, I’ll end with this question, what seed is in your hand that you haven’t planted yet?

This site uses Akismet to reduce spam. Learn how your comment data is processed.